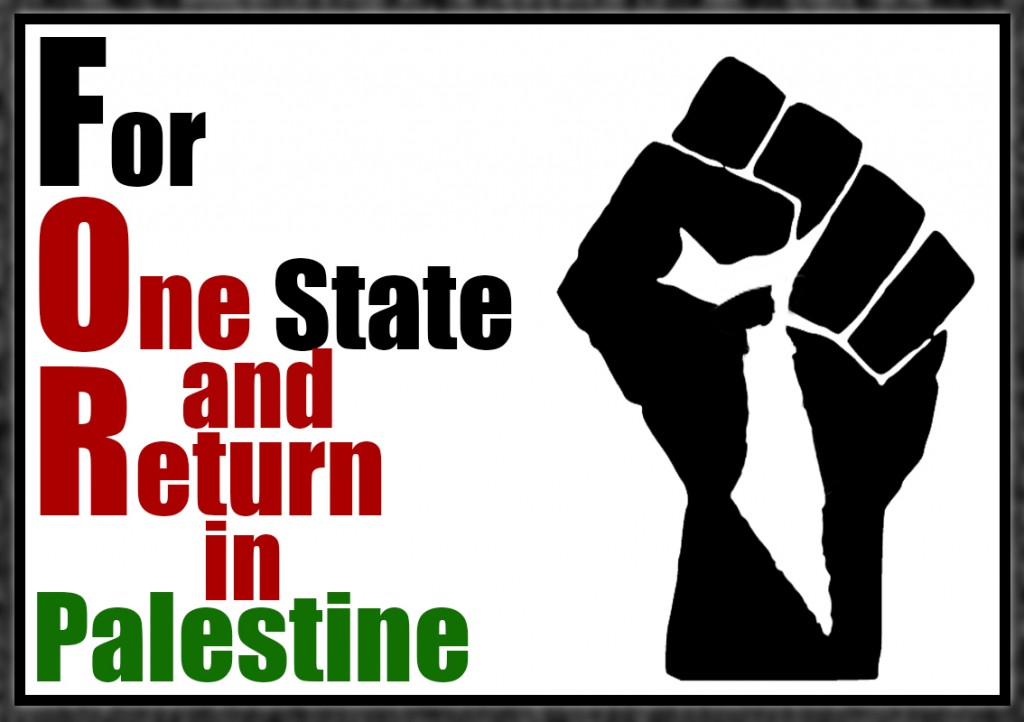 We, FOR-Palestine, a group dedicated to the promotion of solidarity work with Palestine in Europe and the diaspora, base our work on the following points and principles. They represent our theoretical base, to be combined with our practical work and to grow and develop in relation with it.

For One state and Return in Palestine – The fundamental problem of Zionism is the colonization of Palestine, which has started in the beginning of the 20th century with political and economical means as the practical manifestation of an ideology deeply rooted in the european colonialism of the time, and saw its peak in the armed and planned displacement of nearly a million Palestinians in 1947-48. It is not, as some tend to think, the military occupation of June 1967, and therefore cannot be solved through a geographical solution of a Palestinian state in the 1967 occupied areas alone. The problem of Zionism can only be solved with the return of the displaced people of 1948 and their descendants to the land from which they were displaced – all of historic Palestine.

This will not be achieved as long as there is Zionist control over the land, since the existence of the Zionist entity denies the refugees´ and displaced people´s right to exist safely, equally and with dignity in their homeland. The return of the refugees goes hand in hand with the abolition of Zionist control, meaning the abolition of the state of Israel with its system of privileges and the founding of an equal, free and democratic state from the Jordan river to the Mediterranean, where exiled Palestinians, Palestinians who remained under occupation inside the country and non-Zionist jews can live together in a just society. There cannot be a right of return without a one-state-solution, and no one-state-solution is just or acceptable without the complete right of return for all refugees and displaced people.

Zionism in its wider perspective – From the beginning, the strategy of Zionist colonization of Palestine was to combine its aggression on the ground with appeals to the major colonial and imperial powers. The first Zionist mandate for Palestine was given to it by the dying British empire. This was seen by the British empire as the only possibility to maintain some form of political and economic control over the region and its resources, while at the same time combating the rise of anti-imperialist forces in and around Palestine.

With the weakening of British colonial power in the world, Zionism turned to the next global superpower – the US. The Zionist entity is basically the biggest US airplane carrier in the region, ensuring the US will not lose its foothold there. Furthermore, Western aggression today is being waged in the form of military forces against civil population – in Iraq, Afghanistan, or Syria. The Zionist occupation of Palestine has perfected this form of warfare over decades, and its military industry provides western powers with a never-ending stream of tried and tested weapons and technology.

De-Zionising Palestine – The abolishment of Zionist control means the de-colonization and de-Zionisation of Palestine. This involves difficult and long processes, similar to ones we saw after the fall of fascist or colonialist regimes in the history. Those processes can only happen as part of a struggle, since there is no reason to believe that the Zionists would give up their privileges and their domination of Palestine voluntarily. Even though the main role in those changes would be taken by the Palestinian resistance in all its forms, a direct responsibility for taking an active part in this resistance falls upon the shoulders of the jewish citizens of the Zionist regime as well, the responsibility to bring down the racist system which provides them with their privileges.

Those processes would involve hard and tedious grass-roots work, work of education, construction and security. They would have to include the abolishment of all Zionist power structures, racist laws maintaining jewish privileges, and all other structures serving the occupation. They would have to include an active re-distribution of wealth, resources and power with a major focus put on the material and social integration of the returning refugees and displaced people and of the Palestinian communities most damaged by the occupation. They would have to include strategies for securing equal rights for all the ethnic and religious groups of the land. Even though those processes would only take place after Zionism is forced to surrender, they are an aim which defines our struggle today and in the coming generations.

Zionist hegemony in Germany – Our work in Germany is a complicated one. Zionism´s “special status” in Germany projects the crimes of the fascist German past on Palestinians and Palestine solidarity activists. The solution of the BRD for its dark history is unconditional support for Zionism´s dark present. This state of mind has trickled down and settled in the minds of the society. Solidarity activists are labeled antisemites by the german racist bourgeois, media and even parts of the left and antifascist circles, since they hold a mirror in front of them which reflects the ongoing consequences of their years of fascism and terror, a mirror that reminds them that their crimes still echo in other parts of the world and will forever haunt them. The majority of the German society thinks it got rid of its past because it has appeased some of its victims, that a genocide can be made to disappear through money and arm deliveries, through unconditional support of oppression and silencing of criticism. Germany is giving Zionism a free hand in its ethnic cleansing of Palestine.

It is in this toxic environment that we must conduct our struggle. Setting our discourse against this hegemonic discourse and encouraging others to speak up. Our aim is to extend and enlarge the solidarity work in Germany, but we will not compromise the political principles. We encourage all left and anti-Zionist groups to work for building a bigger network for the struggle, for a political work based on shared principles and political beliefs. We will not lower our head. We will not succumb to being called “terrorist” and “antisemites”, for we know who the real terrorists are.

Zionist propaganda is based on instrumentalizing the role of the victim, while at the same time equating all Jews and all Judaism with Zionism. It is also based on presenting the oppression in Palestine as a “conflict” between white european values and non-white muslim “savagery”. This propaganda is also used in the context of german structural racism. The german power of definition equates the antizionism of muslim people in Germany, which has its roots in historical reality and identity, with German and European Antisemitism, thus marginalizing them even more. It is a deeply racist and antisemitic lie, associating all jews with a murderous regime. We refuse this propaganda. We refuse to view all Jews as Zionists. Our fight is against Zionist terror, and of this we are proud.

The global boycott campaign – The global campaign for Boycott, divestments and Sanctions against Israel (BDS) is a worldwide campaign called for a decade ago by Palestinian civil society. While it can be seen as a liberal strategy, using consumerism as means of pressure on the Zionist state to force it to adhere to “international law”, we see it as one of the strongest and clearest call coming out of Palestine at the moment and as such it deserves our complete support. We stand in solidarity with the idea of BDS and with the activists implementing it worldwide. In The last decade BDS has proven itself again and again as one of the most effective means of pressure on Zionism from the outside, forcing it to spend millions of dollars on counter-measures and inflicting real financial and political damage. While it is certainly not the only way of resisting the Zionist occupation, and all other means are legitimate and have our solidarity, it is a simple and effective mean of fighting Zionism and offering practical solidarity to the people resisting this regime from the inside.

Against all forms of oppression – We see ourselves as strictly anti-capitalist and against all forms of structural discrimination such as racism and patriarchy, sexism and discrimination of LGBT*IQAP, anti-muslim hate and antisemitism or ableism. Our struggle against Zionism and for a free Palestine is inseparable from the struggles against those forms of oppression. We see Zionism as a settler-colonial project, and therefore deeply rooted in modern capitalism, imperialism and racism. The threat posed to Palestine by Zionism is intertwined with the threats posed to the entire world by those systems of oppression. When we fight against Zionism, we do it because we see Zionism as part of a system which has been exploiting, oppressing and killing people in the so-called “Middle East and North Africa” and around the world for decades on end.

We are deeply moved by the calls from different emancipatory struggles and oppressed people around the world which stand in solidarity with the Palestinian struggle, and offer our deep solidarity to all people around the world who understand the fight against Zionism as part of a global fight against those forms of oppression and for a better future.