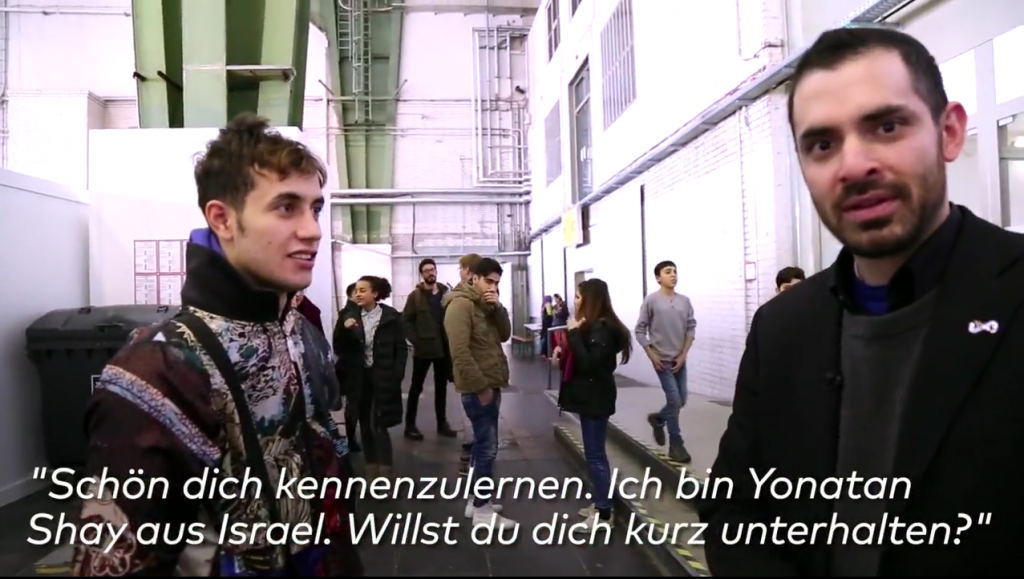 An orthodox Jew under Arab refugees

On January 24th 2016 a Jew wearing a Kippa entered the refugee shelter in Tempelhof, followed by a camera team from the magazine Welt.de, looking for signs of Antisemitism and hatred of Jews by the refugees who mostly escaped the battle fields of imperialist wars in the middle east only a couple of months ago. This brave fighter for tolerance called Yonathan Shay has found what he wished for: a swastika drawn with a pen, the kind which can usually be found on playgrounds in the south of Germany, and a map of Palestine decorated with the colors of the Palestinian flag. An old lady which heard him refer to the destroyed Palestinian village of Sheikh-Munis as Tel-Aviv turned her back on him and his team. For shay this was a second Kristallnacht. He stood excited and irritated in front of the camera and explained that it might be fine and well that Germany fulfills its historical duties by taking in refugees, but – “Here live Jews”.

The video was viewed already almost half a million times, and shared more than three thousand times. In this sense this is not a side matter, not a pathetic “anti-German” blog or an unimportant information event. The video is an important development of the Zionist involvement in the German asylum politics and of the zionist attack against the global solidarity movement with Palestine. It is important to understand and analyze those aspects. 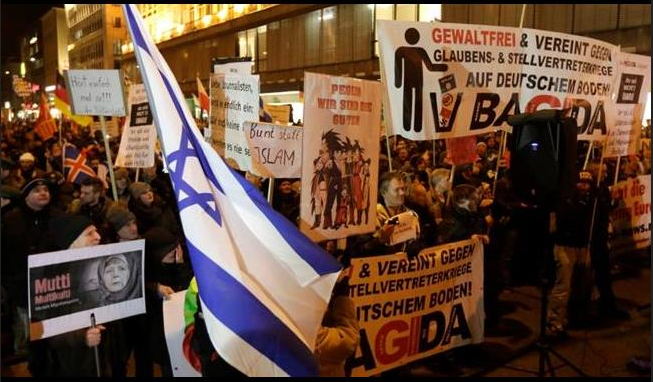 Let´s first examine shortly the topic of “antisemitism” in general. Here we have to emphasize again and again that antisemitism as hatred of Jews, meaning as the discrimination of an ethnic religious minority (if we ignore for a moment the fact that the term actually describes hatred against semites in general, meaning also against Arab people), is a European phenomenon. A phenomenon that reached its peak in the biggest manifestation of hatred of Jews ever – the German genocide committed on Jewish people. Swastikas are not an Arab symbol, they were appropriated from Indian cultures by the Nazi regime.

The repeating attempt to present Arab people as antisemites serves a clear urge in the German society, the urge to relativize its own past and to pass on and get rid of the torch of antisemitism. A Palestinian refugee from Syria which spent his whole life in the refugee camps knowing that it was the Jewish-zionist militias that made him a refugee in the first place cannot be equated with a German citizen who supported the genocide and displacement of all Jews in 1938. Such comparisons, which only gain in popularity in Germany today, are racist, inciting and relativize the German and European antisemitism and its consequences.

But such acts of propaganda like the one carried out by Welt.de also come to serve a second need of the German society. A need which was repressed for decades, but whose heart apparently never stopped beating – the wish for a “pure” society. It is an open secret that many Germans welcome refugees only under duress – out of fear of being seen as racists like back then. But in many parts of the society the wish for a pure western culture still tremors. In order to not repeat the past, parts of the society have found the appropriate name for such a culture – “a Jewish-Christian culture”, a name which is carried proudly on signs at demos of the racist anti-Islam movement “Pegida”. The German society, having lost the second world war, is ready to take in the culture of its past victims (providing of course it is a western-Jewish culture), in order to at the same time exclude the Muslim culture of so many people. The video report of Welt.de demonstrates this perfectly; If they want to come here, they must understand: here is a place for Jews and Christians. How the wheel of history turns.

But who is this “orthodox Jew” actually, which almost never wears a Kippa on his Facebook photos and in the past even posted inciting commentary against orthodox Jews? Our analysis is missing one essential part. 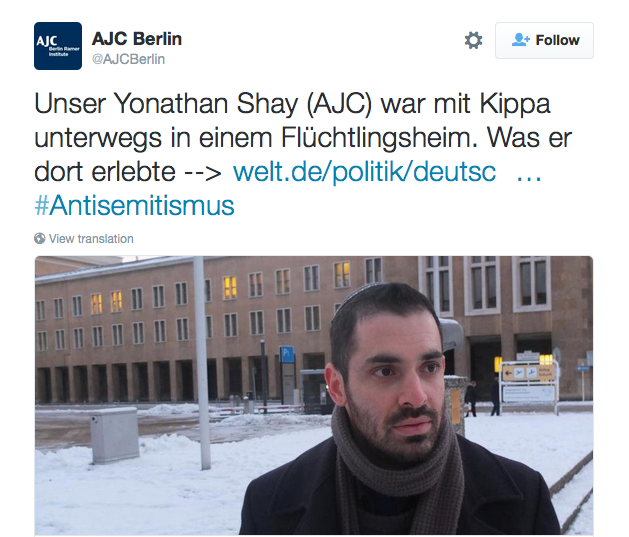 Through only watching the video of Welt.de it is not clear who is this Yonathan Shay actually, and why did he decide to one day enter a refugee shelter wearing a Kippa. A short internet search only shows that Shay claims to have been attacked several times in the past by Muslim people in Berlin because of his Kippa. But there is something much more important behind this, something which carries extreme significance for us as solidarity activists with Palestine.

As published on their website and social media, Shay is working for the AJC, and it was also in their commission that he visited the refugee shelter on that day. The AJC, or the American Jewish Committee, is a Zionist lobby group which was founded in the US and has its offices in over 20 countries around the world. Similar to the ADL, the Anti Defamation League, the AJC mainly works by means of promoting Zionist agenda through accusations of antisemitism. An important strategy in their work is pressure to change judicial definitions of antisemitism to also include anti-Zionism (LINK). The AJC was very quick to publish a press release following the video, in which they demand that a “democracy summit” be held to fight antisemitism of refugees (LINK). Since it is hard to believe that the idea for such a summit came so spontaneously, we can assume that Shay´s visit in Tempelhof was specifically orchestrated to create cause for such a summit.

The AJC is no stranger to us as activists of Palestinian solidarity in Berlin. During the demonstrations in Berlin against the massacres in Gaza in 2014 we saw many times people with cameras wearing AJC badges, who took off when we addressed them. But they have already gotten their footage: they have filmed small groups of youth who were yelling “Jew, you coward pig” and brought the videos to the media. An immense campaign of defamation ensued, attempting to forbid the demonstrations, and we and our comrades were labeled antisemites in the media for weeks. This has led to a rise in the aggressiveness of the police, such as after the demonstration in front of the Israeli embassy, and to further banning of slogans. 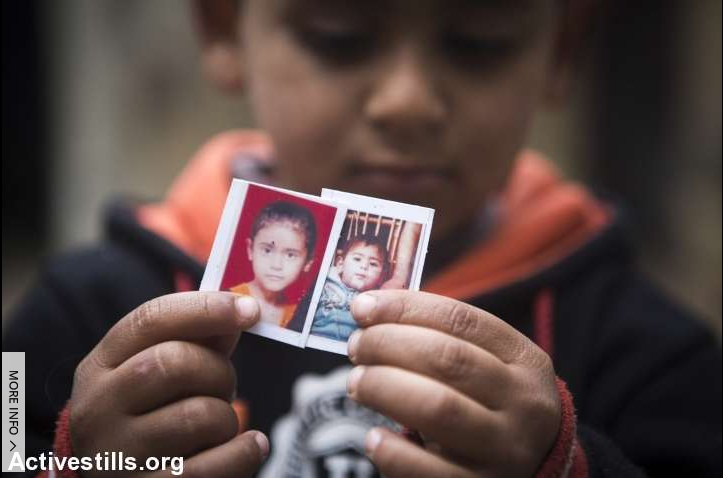 They who murder children are children murderers

And this process continues. Now our slogan “Israel is children murderer” – a slogan which cannot describe the situation in Gaza any better – has also been banned by the police for reasons of antisemitic content. The day is not far in which the slogan “boycott Israel” would also be banned. If a map of Palestine is considered an antisemitic graffiti, our entire work is in danger.

If we as leftists kept quiet, when the AJC attacked and delegitimized the demonstrations for Gaza with all political means, when the reaction of left groups to those campaigns in the past was to organize “separate” demonstrations where calls of “Allahu Akbar” and “child murderers” are not welcome, then we do not have the right to roll our eyes at the video today. Zionist propaganda is like the occupation itself: if it gains the smallest foothold it will not let go until the entire territory is taken over. We know the past – the demonstrations of 2014, and the present – the video from Tempelhof. If we wish to see the future, we must do no more than turn our eyes to France, where BDS today is almost illegal.

If we do not remove this propaganda from our own heads and act, if no masses of anti-Zionist Jews are to come to the demonstrations and be loud, if left groups do not take a clear position against Zionism and against accusations of antisemitism, if anti-racist groups and refugee support groups do not understand that “combating the causes of migration and flight” means the fight against Zionism as well, then very quickly the people who do speak up for Palestine would be persecuted, criminalized and banned. And those who have not said anything would have contributed their share to the plunge of our society into the abyss of anti-Muslim hate. Now is the time for a clear and brave voice against Zionism.

FOR-Palestine on Reboot.FM
Our founding principles now in the "About Us" section